And the faces of people

Earlier this month I wrote a post about the elements of Japonisme in Raphael Kirchner’s postcard-illustrations and today I am returning to the topic of Kirchner’s postcards but this time the motif of Japan is even more directly explored. In the postcards featured in my previous post the elements of Japonisme could be seen in many different compositional formats, in the flat surface, the stylised figures and vibrant colour, but in these postcard-illustrations we still have all those stylistic elements taken from Japanese Ukiyo-e prints but now the motives themselves are Japanese with pretty geisha-inspired girls with flowers in their hair, fans, parasols, and the motif of lanterns to set the Oriental tone.

Raphael Kirchner was born in Vienna on 5th May 1875. He took music lessons, attended Conservatoire in Vienna and from 1890 to 1894 he was a student at the Vienna school of Art. He began his art career by painting portraits but quickly switched to making illustrations for magazines and newspapers. In 1897 he started drawing illustrations for a woman’s magazine “Wiener Illustrirte”. In 1900 he moved to Paris, settled in Montmartre and it was during this time that he created the most beautiful, most vibrant and captivating artworks. These illustrations were in fact postcards printed in different series with different motifs; for example the “Perfume” series features pretty La Belle Epoque ladies as allegories for different perfume smells such as patchouli or white rose.

Kirchner made three Japanese inspired series in 1900 called “Geisha”, “Mikado” and “Santoy”. These series of postcards were inspired by the plays of the same name. “The Geisha, a story of a tea house” was an Edwardian musical comedy in two acts which opened in 1896 in Daly’s Theatre in London. “The Mikado; or, The Town of Titipu” was a comic opera in two acts which openend on 14 March 1885 in London at the Savoy Theatre. “San Toy, or the Emperor’s Own” is a musical comedy in two acts first performed on 21 October 1899 at the Daly’s Theatre in London. All three comedies were inspired by the dreams of the distant Orient and were immensely popular with the audiences at the time. Probably my favourite illustration is the one above, from the Santoy series, because it is just so vibrant and exciting! The composition is interesting; it feels as if we are in the middle of the path and on both sides the cascade of pretty faces of pretty girls dressed in colourful printed dresses are gazing at us, smiling, holding their bright yellow lanterns. It brings to mind the joy of warm summer nights with fireflies as the only light and the rich fragrance of roses and jasmine that fills the air. I love the colours used; red, yellow purple; really pleasing to my eyes. Also, in all of these postcards you will notice the ornamental letters “Mikado” or “Geisha” shaped in a way that it looks Oriental and exciting to our Western eyes. The illustration has that festival mood and I found an appropriate little haiku poem that matches its mood, so here it is, by Isabel Caves, found on her wordpress site here: 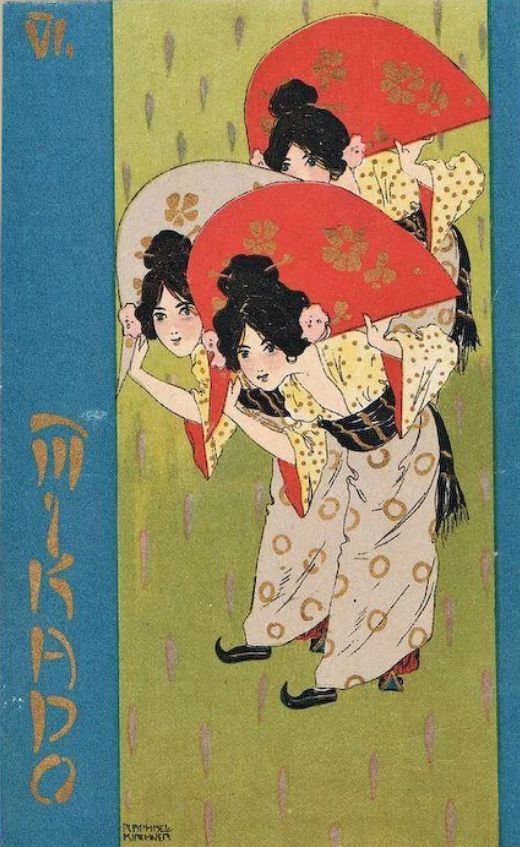 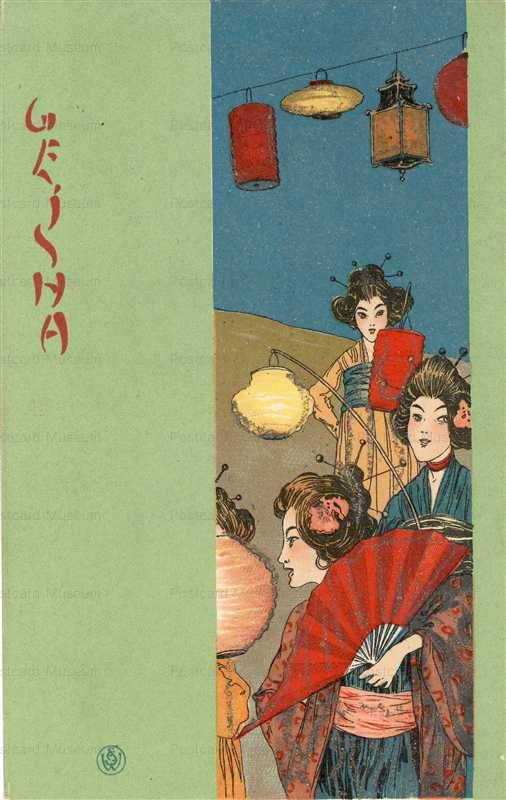 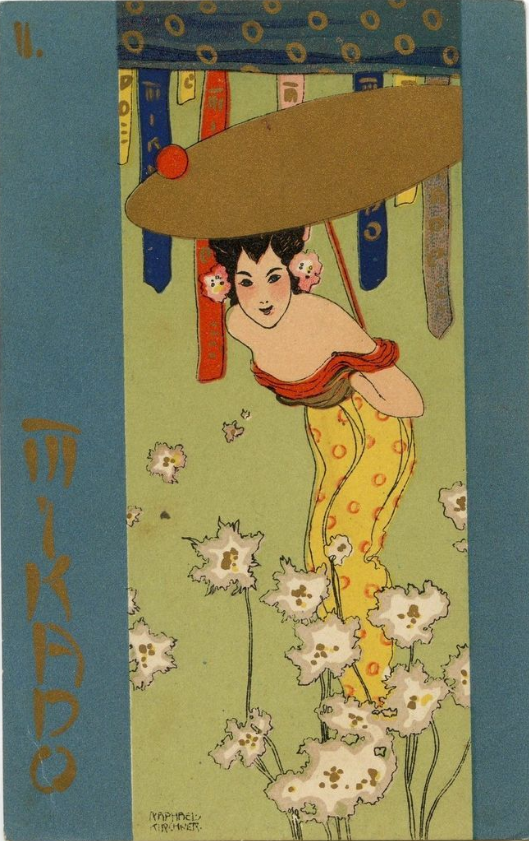 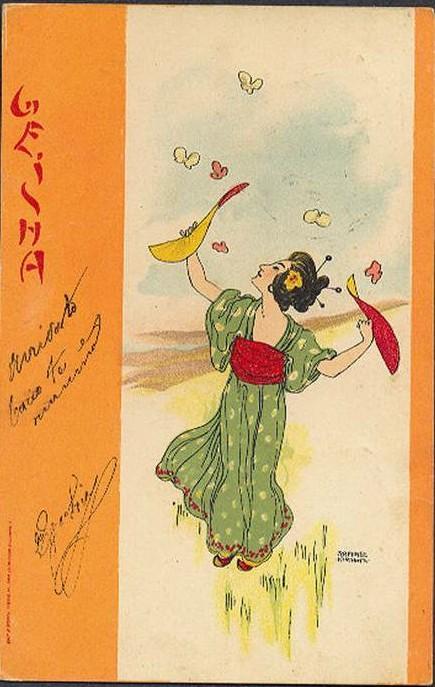 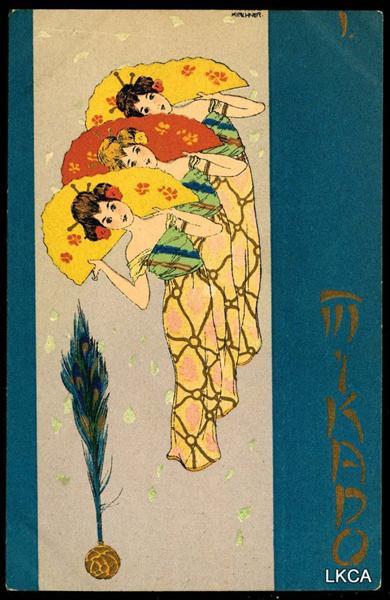 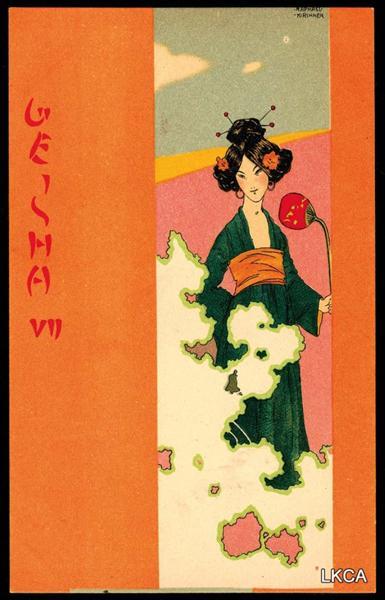 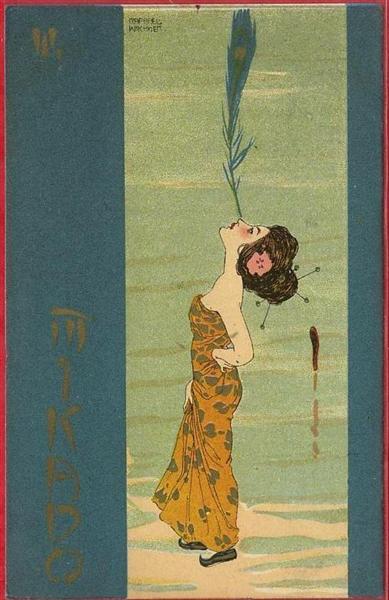 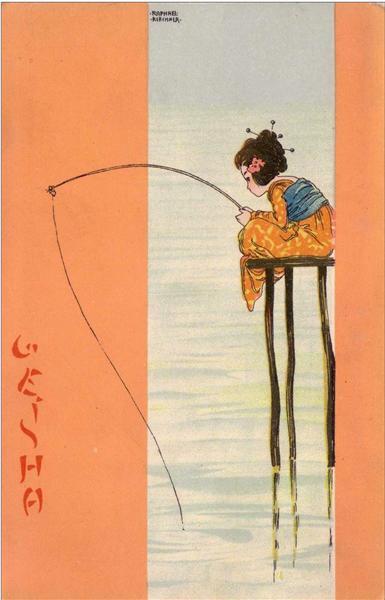 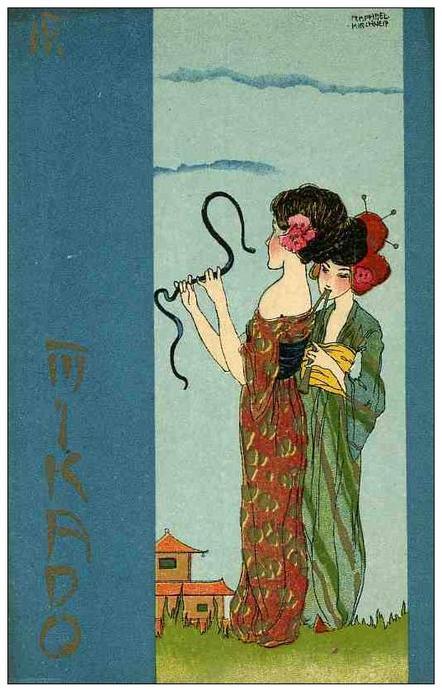 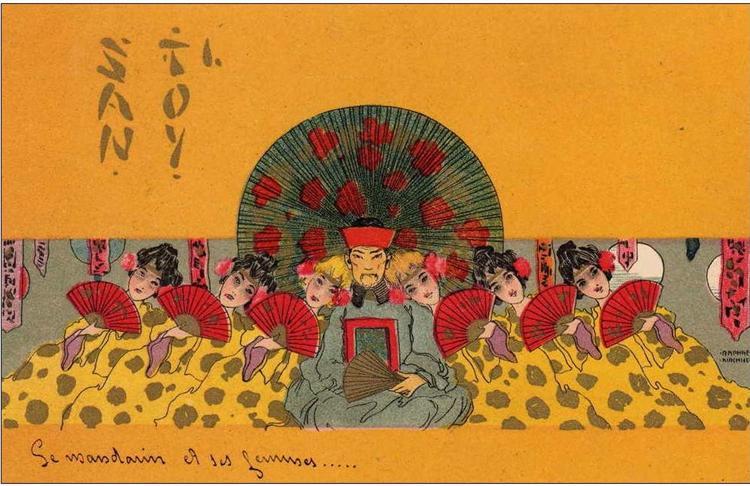 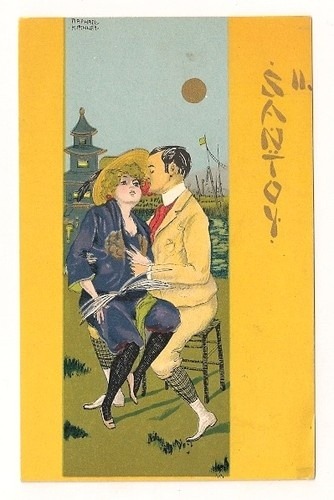 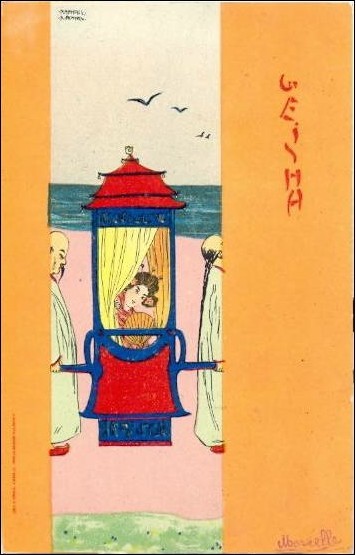